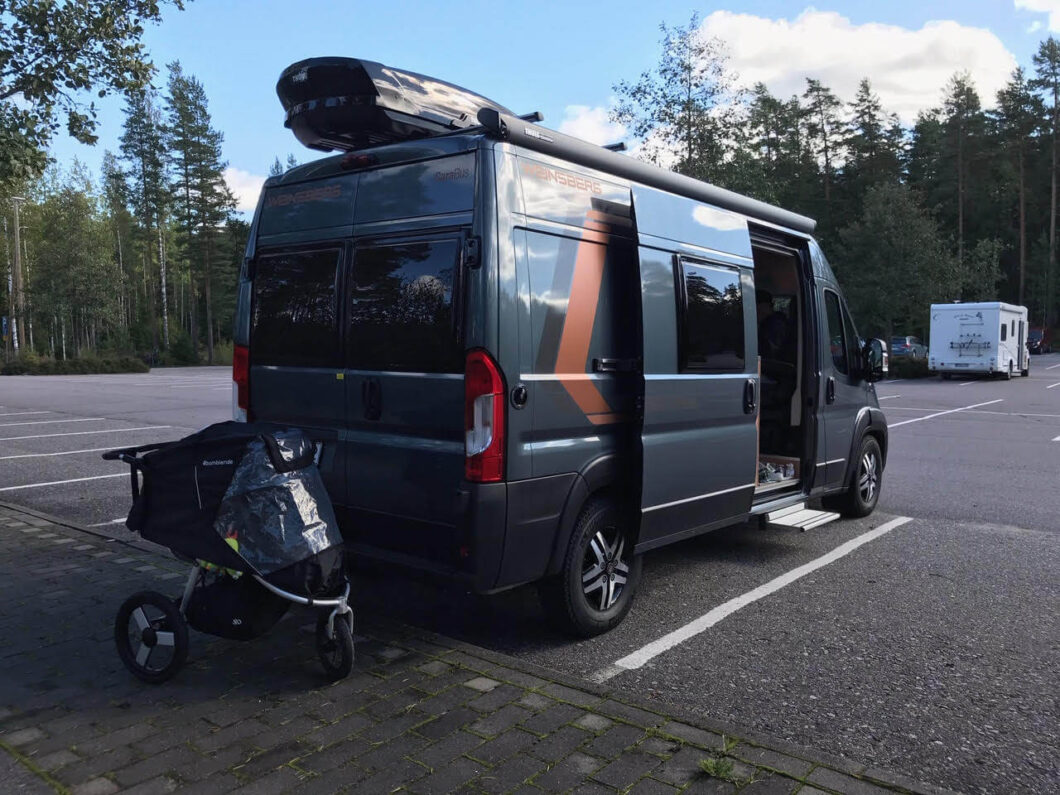 Our dream related to own camper van became true on Thursday the 10th of September 2020 when we finally got the camper van (Weinsberg Carabus 600 MQ, Scandic-edition, Fiat Ducato 2021) to our home yard!!!! 😊😊😊 We have been waiting for it so looooooog time already!! We ordered it at ProCaravan in the 16th of November 2019 and originally we should get it in the 19th of May 2020 at the latest. Unfortunately, coronavirus delayed the delivery almost 4 months. But isn’t it said that the great things are worth waiting for? 😊😊

A first we made a little day trip with the camper after packed part of the needed stuff to the van. When our son Oskari slept nap in his strollers (see above photo), we had a change to explore more accurate what we have in the van. 😊😊 And it was still so unreal to think that we can now use even every day this lovely camper van. 😊😊

We made the first overnight trip to Yyteri beach (Finland) on the weekend 18.-20.9.2020. Then we were two nights on a road trip with Oskari (one year and 7 months old boy). Friday was quite busy because of the packing and that’s why we were in Yyteri very late at the evening. Still before the departure we were thinking where to go but luckily our kitesurfing friends said that you should come to Yyteri beach. The forecast said that probably is windy in Yyteri at the whole weekend. And the forecast was right: we could kitesurf there on Saturday and also on Sunday. 😊

We had already made a weekend road trip with a similar size camper van on June 2020 and then we noticed that we need more space for kitesurfing stuff. The space under the bed in the back side of the van was not enough for our son’s stuff (stroller etc) and also for kitesurfing stuff. So we decided to put the roof box and then we got more space. When our son grows and we don’t need a stroller etc anymore, we can get space also e.g. for a grill. 😊

So we put Thule Force XT L -roof box and Thule SmartClamp System to the roof of the camper van. ProCaravan recommended the SmartClamp system because it is possible to attach also the awning and the solar panels to the roof railings in addition to roof box. We chose the size of the roof box so that we can fit the snowboards and kitesurf boards there. The first feelings related to the solution seem great and now we don’t have to empty the whole car when we need something. 😊😊😊

We bought also Thule Van Ladder 9 Steps -telescopic ladders in order to access to the roof box. In addition to the ladders we got a magnetic bracket which is put to the side of the van and then you can attach the ladders to the bracket (please see the photo above). The telescopic ladders can be get to quite small space when you are not using them. The price of the ladders is quite high but they seemed to be really useful and you can also clean the surface of the solar panels on a road trip if needed. 😊

We were thinking of the need of the awning quite long time because of the price. However we decided to put it also because we are using the van around the year. And now we have more space for rainy and sunny days with our son. Oskari still sleeps nap best in his strollers. 😊

Experiences of solar panels on the roof of the camper van

Maybe the most we have been interested in the output power of the solar panels and if it would be enough for staying a couple of days near to the kitesurfing spots where we usually don´t have the electricity available (campsite etc). And we hope that we could stay a couple of days at the same place if the wind blows a couple of days. So then the camper van does not move anywhere. 😉 And there is not so sunny in Finland compared e.g. to the south of Europe.

We also thought that the solar panel system pays itself back quite soon if we don’t have to go to recharge the batteries every night to the campsites. 😊😊 We also prefer to stay overnight at some quite places for free in order to save money and then get more often to the road trips. And maybe we could also pay the loan of the camper van sooner. 😊

ProCaravan mounted two solar panels to the roof of the van: 90W and 130W solar panels. I have written another blog post related to the solar panel system if you are interested to read more but unfortunately it is only in Finnish. Maybe I can translate it later. 😊

The output power of solar panels on the weekend road trip

On the weekend (18.-20.9.2020) the camper van was parked at the same place from Friday night until Sunday evening and the output power of the solar panels are shown in below screenshot from those days. We have taken the screenshot from phone app of Victron SmartSolar 100/30 MPPT controller. 😊😊 It was sunny and almost cloudless on Saturday (19.9.2020) and it was more cloudy on Sunday (20.9.2020).

If someone has more experienced of solar panels mounted on the roof of the van, it would be nice to know if the output power is good in this time of year in Finland (Yyteri beach). 😊 The phone app of Victron seemed great and it was possible also to update the software of MPPT controller only via phone app. And it is also possible to modify parameter settings by using a phone app. 😊

It was nice to get to kitesurf also 🙂

We have been really greatful and happy that our son usually (at least nowadays 😊) sleeps very well on the trips and especially on the windy beach listening to sea noise. 😊😊😊 On Saturday we both (Pasi and I) could kitesurf and our son slept in his stroller at the meantime behind that kind of grass thing (please see below photo) where it was not so windy. On Saturday the wind speed was varied between 10,2…12,4 m/s and gust between 12,4…14,5 m/s (Source: Pori, Tahkoluoto meter 19.9.2020 13-16, Ilmatieteenlaitos).

On Sunday the wind speed was varied between 7,4…10,3 m/s and gust between 9,6…12,4 m/s (Source: Pori, Tahkoluoto meter 20.9.2020 13-16, Ilmatieteenlaitos). We were lucky and Oskari slept again nap in his own Bumbleride Speed stroller and meanwhile we were kitesurfing by turns with Pasi. 😊 It wasn’t summertime anymore and I was almost freezing after kitesurfing session when I was chilling on the beach in wet wetsuit and Pasi was kitesurfing. 😊😊😊

Our son also enjoys the trips

We have had to figure out something what Oskari can do inside the camper van because the space is quite limited and sometimes it is nice to drink a coffee etc in peace. 😊 Some time before the trip our son interested to make puzzles and that’s why we took one of them with us on the trip. That puzzle shown in the photo below is now the best one!! The subject of the puzzle is more than liked because Oskari likes a lot every vehicle which makes enough noise. 😊 Only not so good thing in that puzzle is that our son makes it too fast nowadays. 😉😊😊

Oskari enjoys also a lot of exploring nature and we made some walkings around there with him. The parking place wasn’t so near to the beach in order to feel the wind. So it was also good to go to check the wind speed on the beach in order to know what size of kite is needed. 😊 I have written also blog post related to kiteboarding if someone is not familiar with that hobby but unfortunately it is found at the moment only in Finnish.

Big thanks to ProCaravan, that we finally got the camper van dreamed so looooong time already! And we got also the needed extra accessories assembled to it. And we also got a replacement car for the trips made in summer because of delayed delivery of our own camper. Then the delay did not feel just as bad and we still have the rest of our life time for adventures!! 😊😊

I have to say that the feelings are now so great!!! Now we have again (also with a little child) the freedom to go extempore trips there where the wind blows. 😊😊😊😊 And now we can see also the kitesurfing friends more often after almost three years break. It was not so easy to go kitesurfing with a little child without camper van and our another car was too small for our son’s stuff and kitesurf stuff.

And I can tell you that I am so energetic after kitesurfing day and it gives so much energy to everyday life!! I am just smiling many days after a good kitesurfing session. And the camper van has a very similar effect: it always starts to smiling when you go with the camper van to somewhere. If you e.g. come outside from the local food store and when you see the camper in the parking place, you are just like this: 😊😊😊!!!

Now we just want to say: Have a nice day and great new adventures!! 😊😊😊

Send this to a friend